InsightCuba caught up with Shabnam Samoohi, an insightCuba tour leader that also runs DirectfromCuba.com, an organization dedicated to fostering educational exchange between Cuba and the USA, with an emphasis on music and dance. In this interview, she discusses her passion for Cuban music and dance and why Cuba is vibrant and alive like no other country in the world.

Shabnam Samoohi: I’m an insightCuba tour leader and director of Direct from Cuba. It was through the educational program, Semester at Sea, in 1999 that I first traveled to Havana, Cuba. I was so moved by my experiences there that I returned to New York and began studying Cuban music and dance. It was my passion for it that led me to establish Direct from Cuba, an organization where I represent and arrange concerts and programs for various Cuban musicians. At first, those performers were Cuban musicians who had left Cuba and relocated to the USA. Once visas were granted to Cuban bands in 2010, Direct from Cuba organized concerts with Cuban musicians who still lived in Cuba as well.

What propelled you to become a tour leader for insightCuba?

An employee at insightCuba asked me to put together a compilation for Cuban music for a promotional CD that insightCuba would then send to prospective travelers with their brochure.  She also thought I would make a great tour leader. I put the CD together and then decided to ask for an interview for a tour leader position. 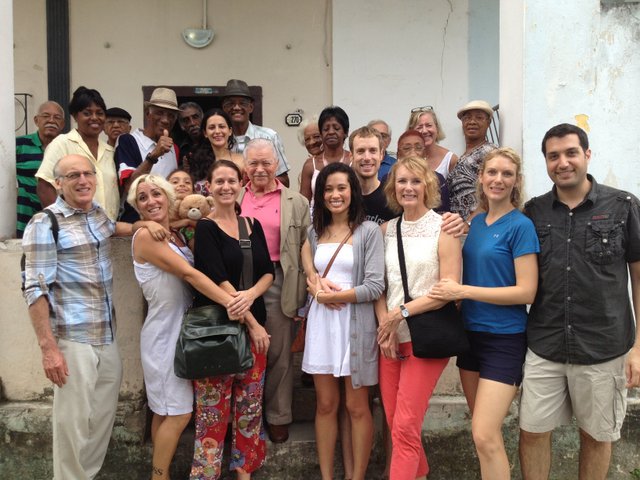 Favorite insightCuba tours that you led?

It has to be the Jazz in Havana tour. I love it because it really allows me to put my knowledge of Cuban music to use, and at times depending on availability, travelers are then able to see the musicians I represent, which is always a very special experience for me.

You've received countless positive comments from the insightCuba clients. What is your greatest reward?

I would have to say, once again, that the best reward is when I watch clients fall in love with Cuba for the first time. I also love it when they share their pictures after a trip. Once a client sent me a photo calendar with unbelievable photos of our trip. It was from my first trip with insightCuba and it really touched me deeply.

The people, the music and the dancing. I have traveled the world and have never seen another country that is so vibrant and alive. The people also have an unparalleled respect for the arts, which gave me my passion for the arts.

Best and worst day as a tour leader in Cuba?

It's tough to say which was the best day. There were so many amazing ones. One particular story that comes to mind is when a 19-year-old passenger went to the Malecón - I urge everyone to do that – and he ended up playing guitar with the locals. He wants to be a musician and he was so excited about it. My worst day was when I had a very sick passenger, she had a pre-existing condition and luckily everything ended up ok and she was able to come home with us.

Advice to prospective travelers to Cuba?

Be open and flexible and be ready to have an amazing time. Leave all of your preconceptions behind, as Cuba will pleasantly surprise you!

Shabnam’s organization, Direct from Cuba, has successfully hosted, managed, promoted, marketed, and assisted over 50 Cuban musical, cultural and private events in the USA, at prestigious locations such as Carnegie Hall, Jackie Gleason Theater, Joe’s Pub and the Museum of Modern Art. The artists have ranged from a single Cuban-American singer who lives in the USA, to Cuban musical groups with over 22 members that required travel to the USA.

In addition, Direct from Cuba has also coordinated volunteer events, including a performance by Cuban pianist Jorge Luis Pacheco and the NYC Elementary School. A documentary for singer Pepito Gomez by Alberto Gonzalez is in the works, whose previous films were featured at New York’s Havana Film Festival.