Home » About Us » Blog » Castro's Limo - A Ride in History
share 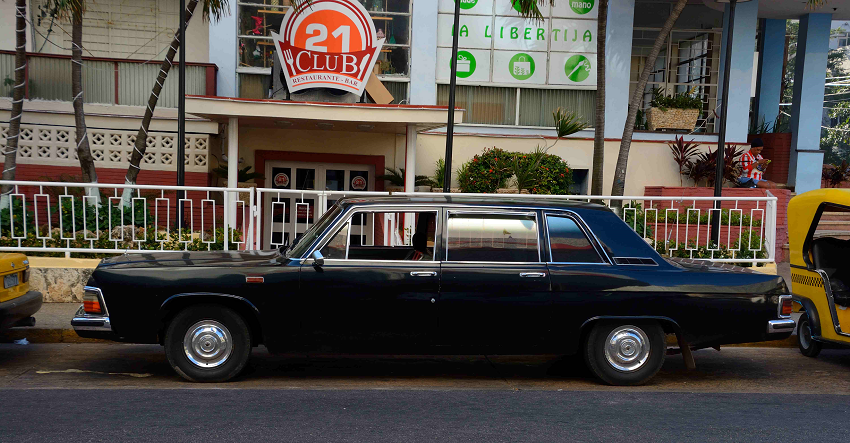 On previous visits to Cuba I have seen enormous limousines parked in front of Hotel Capri in Vedado. I had never gave them much thought until I learned from a Cuban friend that they were once part of Fidel Castro’s private fleet. His real “in-character” ride of choice however was the military grade jeep. As well as El Comandante's transportation, it is these exact limos that were used to escort world leaders and dignitaries while in Cuba. After asking around I learned that you could in fact hire one of these limos and its driver. A life-long seeker of experiences that are not on the usual menu, I knew I simply had to ride in one of these.

The Soviet top brass had purchased ten of these armored behemoths as a gift to their friend and ally Fidel. In true Soviet style they were manufactured in two colors – black and white. I saw a white one a few days earlier near Hotel Nacional. As it turns out, this is the only white limo in Cuba and was specifically built as a special gift to Fidel. All the others are the typical “bureaucratic” black. As best as can be determined six of these still roam the streets of Havana. They are Soviet built GAZ- 14 Chaika luxury limousines. Only 100 per year rolled off the assembly line at Gorky Automobile Plant in Nizhny Novgorod, Russia between 1977 and 1988. At over 20 feet in length, 6 ¾ feet wide and weighing in at a bit under 6,000 pounds with a full tank of gas, this seven-seater was the undisputed heavyweight of Soviet auto production. Who knows how many additional pounds the post-production steel armor (since removed) and bullet-proof glass added to the total weight, but this was considered big Soviet iron by any measure. These vehicles are “rare birds” (Chaika, in fact, means sea gull). They have been decommissioned from official use by the Cuban government and are now leased to individual drivers who pay approximately $31 US dollars per day for the opportunity to run their own businesses. After this fee is paid, the driver is his own profit and loss center. This is one component of the 201 private entrepreneurial enterprises now allowed by the Cuban government.

Fidel's white limo parked on the streets of Vedado in Havana, Cuba

On a beautiful Havana morning a few weeks ago, I spotted one of these massive limos in front of Hotel Capri. I asked the driver if the vehicle was available for hire, and he indicated that it was. After a bit of discussion, the price of 30 CUC’s (about $34 US dollars) was agreed upon for a ride along the Malecon, Havana’s iconic boulevard running along the ocean, to Plaza Vieja followed by a loop around Plaza de la Revolución, and return. This seemed like a small price to be paid for the unique experience of being able to sit for 30 minutes where history may have been made.

When our driver opened the enormous back seat door I was amazed by how expansive the area was. The upholstery and veneer on the doors were cracked and faded but appeared to my astonishment to be original! Did I detect the faint smell one of Fidel’s iconic Cohiba cigars? My wife and I settled in for our short ride in history. As the door closed, it was almost silent inside. I inquired about this and the driver indicated that soundproofing and bullet-proof glass (a must-have for Fidel) was among the limo’s many state-of-the-art features. He seemed impressed by my interest in the vehicle and proceeded to point out the area where the two-way transmitter-receiver was housed, as well as special compartments where weapons were once kept. There are so many things in Cuba that make Cuban history come alive and this clearly was going to be one of them.

As we rode along the Malecon sea wall, I realized that over Fidel’s many decades as Cuba’s charismatic President, countless world leaders visited Havana and most if not all rode in one of Fidel’s limos. The more notable among these were Soviet Premiers Nikita Khrushchev, Leonid Brezhnev, Mikhail Gorbachev, and even current Russian President Vladimir Putin (in 2000). There was also General Secretary of the Romanian Communist Party Nicolae Ceaușescu, General Secretary of the German Socialist Unity Party Erich Honecker, Palestinian leader Yasser Arafat, Venezuelan strongman President Hugo Chavez, President of Iraq and all-around bad guy Saddam Hussein, and many more. As we cruised around Plaza de la Revolución the nine-story mural of Che Guevara on the Ministry of the Interior building gazed down upon us proclaiming "Hasta la Victoria Siempre” - “Towards Victory Always”!

I couldn’t help but imagine what may have been discussed and agreed upon in this very sofa-sized seat where my wife and I sat. Did Khrushchev and Fidel discuss the installation of missiles on the island here? Is this possible? Did Nicolae Ceaudescu and Fidel discuss the finer points of running a Communist state here? Was there a conversation between Erich Honecker and Fidel about the US invasion of Grenada here? Did Honecker strongly affirm the German Democratic Republic’s support of Cuba to Fidel, right here? Did Saddam Hussein and Fidel discuss the Gulf War here, when he visited Havana in 1979. What were Jimmy Carter’s thoughts back in 2002 riding in one of Castro’s enormous Chaikas as he passed the magnificent and imposing Cuban Capitolio that so much resembles the one in DC where he spent four years? Could it have been in this limo? In this very seat??

Most of these big “fromages” are no longer living, so I will never get the answers to my questions from them. Upon exiting the Chaika I asked the upholstery what it knew. No response. The likelihood that some of these notables rode in this very vehicle and had conversations that may have effected 20th century US history and policy is well within the realm of likelihood. I’ll have to live with that for now.

Howard Axelrod is an Ashland, MA travel photographer and writer. He has photographed in 84 countries on six continents and has travelled to 42 of the U.S. states. He has visited Cuba 4 time and is planning another visit later this year.