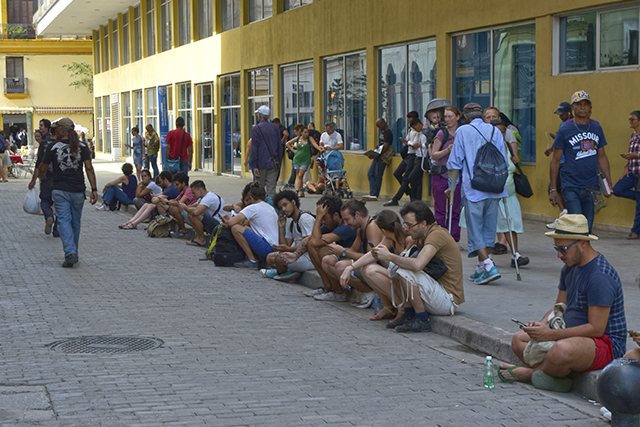 Any afternoon or evening as you stroll along La Rampa, you might be surprised to see dozens – nay, hundreds – of people squatting on the curb, leaning against trees and light posts, and standing in silence in small groups, seemingly idle. You might look behind you, expecting an empty bus to pull up, or even a parade to come marching down the road.

However, these habaneros are not idle at all; they are connecting to the internet.

While in the United States, we pass our empty moments scrolling through Facebook or sending off a quick email, in Cuba, connecting to the internet is serious business. La Rampa is one of forty-one internet “hotspots” in the greater Havana area, an area where Cubans can access internet via a wireless network in a public area such as a plaza, park, or road. According to Freedom House, Cuba has among the lowest internet penetration rates in the world. The Cuban National Statistics office reported that approximately 35% of Cubans accessed the internet in 2015, a figure that has more than doubled since 2009.

In the summer of 2015, many Cubans’ lives changed when the state-owned telecommunications company ETECSA rolled out a plan to open wireless internet zones across the country. The hotspots were extremely successful, and quickly became overloaded by the number of users. At the end of 2015 there were 17 hotspots in Havana and 65 around the country. Today, there are 41 in Havana and a whopping 327 nationwide. 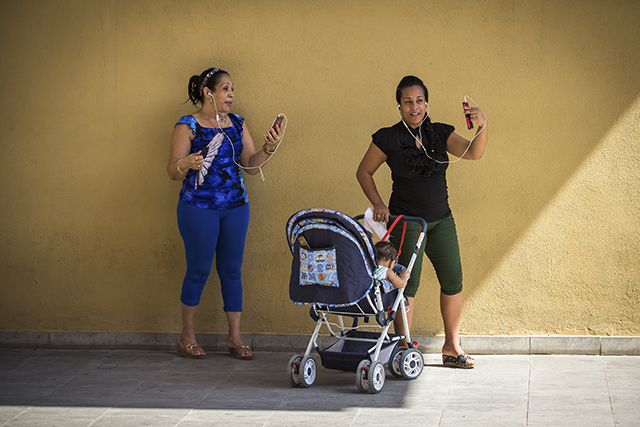 Despite their popularity, for most Cubans, connecting to the internet is still a luxury – not an everyday activity. Owning a personal laptop or smart phone is not the only limit to accessing Wi-Fi in Cuba. Rather, users must purchase internet cards - much like calling cards -  in order to get online. At the end of last year, ETECSA announced a very welcome decrease in the price of one-hour Wi-Fi cards, dropping from $2 to $1.50. But for those who work in the public sector and earn a salary that averages $25 a month, paying $1.50 for internet connection is still only something for special occasions. 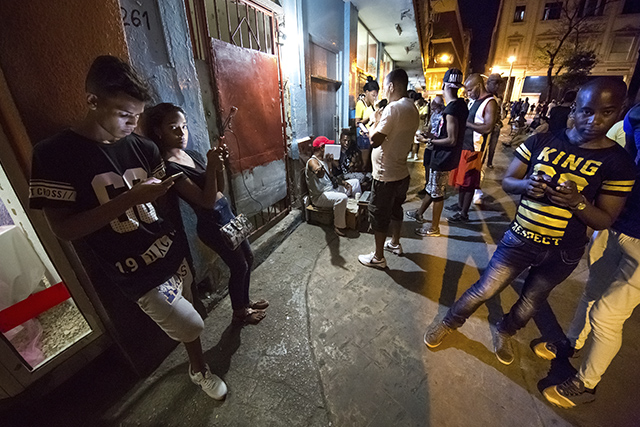 Nevertheless, for many Cubans, access to broadband wireless internet has meant a huge change in their ability to keep in touch with loved ones. On a breezy evening, La Rampa feels like an open-air theater.  Grandmothers cry in delight upon seeing their grandchildren for the first time using video chat. Fathers in Miami ask their elementary-age kids how they are doing in school, and parents break the news of a family death to a relative in Madrid. As this outdoor telenovela unfolds, teary-eyed youngsters break up with boyfriends who have just left the country, and entire families call an uncle to sing “happy birthday”. Hotspots are one of the only ways to access fast internet on personal devices, and for many, it means that some of life’s intimate moments are experienced publicly. 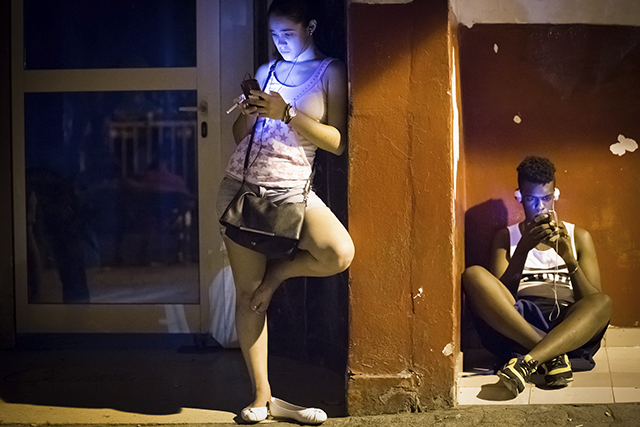 WiFi in Havana is only available in a handful of public locations.

While it can be an eye-opening experience to purchase a “Nauta” Wi-Fi internet card and connect in a public hotspot, fortunately, tourists do not have to weather the glaring sun and abundant car exhaust just to post an “I’m having good time in Havana” Facebook status. All of Havana’s international hotels have Wi-Fi access, and getting online at your hotel will almost certainly be more reliable, faster, and less crowded than heading to a hotspot. Nevertheless, this comfort and convenience comes at a cost. In most hotels, you can purchase internet cards for between $4 and $7 an hour, more than three times what locals pay at a hotspot.

Any traveler to Cuba is sure to notice it: Cuba’s internet connectivity trails far behind that of most countries. When you are there, don’t expect to download your favorite movies or stream that New York Knicks game you are missing. If you are an avid data user, you might even consider downloading your favorite Spotify playlist or a few podcasts before you leave. But while waning yourself off constant internet access can be difficult at first, disconnecting can end up being an attraction of a trip to Cuba, and something that has you leaving feeling happier, calmer, and more refreshed.