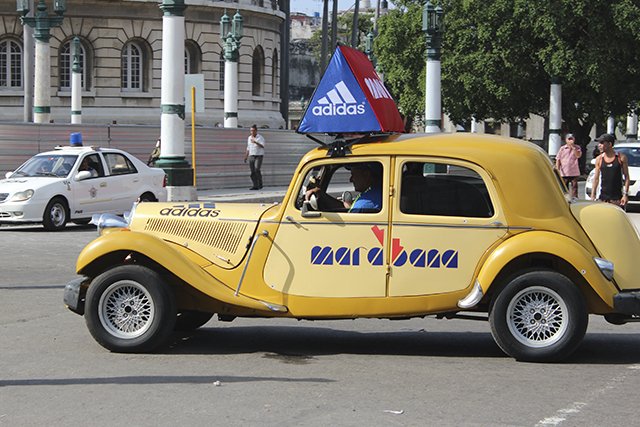 My father has always been a marathon and triathlon enthusiast. As he continues to race, he has developed bucket-list places to visit. In August of 2014, he signed us up for Cuba’s annual Marabana marathon. This would be my first race.

It’s not yet legal for Americans to visit Cuba for tourism purposes, but we were able to participate in Marabana legally, under the sports category of permitted travel, through insightCuba. One of the cultural activities we enjoyed along with the entire country was MaraCuba.

MaraCuba is a national 3K race that occurs simultaneously in each Cuban province on the Saturday before the big race. It’s designed to promote a healthy and active lifestyle for all ages, and is free of charge.

I awakened on November 15, 2014, went to breakfast with the other insightCuba participants, and boarded the bus for MaraCuba. I love meeting with locals. I had taken a handful of Spanish courses that semester, and found myself eager to use my limited Spanish conversational skills. I’m unused to a structured itinerary and prefer solo travel and independence. However, if travelling to Cuba legally meant following a detailed itinerary, I would make the best of each activity.  Cuba would be worth it.

I hopped off the bus at the capital building with about 60 other insightCuba participants sporting neon-green Marabana insightCuba T-shirts. We definitely stood out in the crowd, but that didn’t dampen our excitement. We fumbled out of the bus like children on a field trip, staring, pointing, and wandering. Everyone and anyone flooded the streets: children, older people, foreigners, Cubans, runners, and walkers. Our tour leaders herded us into a group and briefed us on where to meet, and so on. We posed for a photograph, then dispersed into the masses. 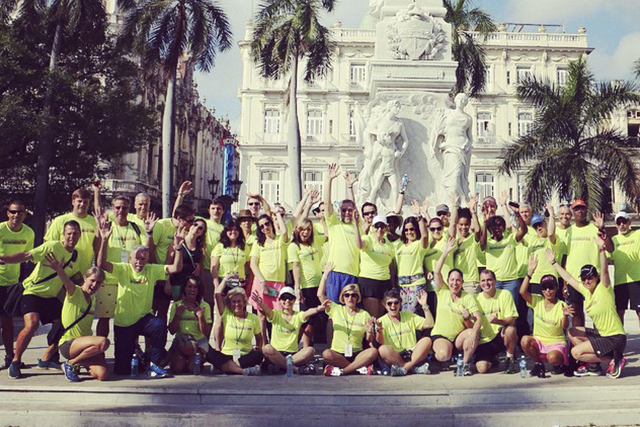 The 3K course was a small slice of the Marathon route I’d be running the following day. I realized this would offer a great opportunity to snap photos. As I made my way toward the start line, I became a sponge, soaking in what was happening around me. Children ran through the maze of people, and costumed dancers performed for the crowd. People kept approaching me to ask if I’d give them my running shoes after the race. With a heavy heart, I had to say no. We were asked not to hand out donations on the streets, but to let our tour leaders do this for us in a culturally respectful and fair way.

As I finessed my way toward the giant Marabana arch that marked the start line, I noticed a tour leader motioning me toward the podium. I knew this was the first time in years that Americans could participate in this Marathon. I saw three podiums with flags from around the world linked together. “That’s the first time an American flag has hung in Cuba in a long time,” the tour leader said, smiling. I stood, absorbing those words, thinking about the complicated political relationship between the U.S. and Cuba. I stared in amazement: the American flag was almost smack dab in the middle. For a brief moment, I tuned out the commotion as I realized that one day, I would reflect back and say I stood in Cuba at the beginning of a historical change between our nations. A few weeks later, President Obama announced that he would begin developing policy changes between the U.S. and Cuba.

I looked around, admiring the architectural beauty of the deteriorating buildings. I marveled at the 1950s cars on the side of the street and heard the faint roar of diesel engines in the distance. The vehicles’ pristine conditions testified to the innovation, creativity, and persistence of the Cuban people.

Locals, some in jeans and faded shirts, others without shoes, walked along with the crowds. Many wore the same kinds of race-day attire you might see in the U.S., from singlets with bib numbers taped to the front, to good old running shorts. Some spectators sat on the sidewalks; others watched the festivities from their windows.

I stumbled into conversation with a man who had come from a different province with two of his friends. I found their accent hard to understand, but believe he told me he had just injured himself and was unable to run. He walked with me throughout the course as I snapped photographs. We talked the entire 30 minutes. Unfortunately, I can’t remember his name, or the details of the conversation. The mental movie of my memories shows only the faces of my MaraCuba friends. However, I see smiles and remember feeling proud as I held the conversation using my shaky Spanish.

As I returned to the finish line, I watched several speakers take the podium. A few insightCuba participants, including an older man (one of my favorite travel companions) received awards. I couldn’t help but take a photograph. Our insightCuba tour leaders motioned for us to meet back up, so I turned and said “mucho gusto” to my new Cuban friends, and gave them each a customary goodbye kiss on the cheek. I wanted to find my dad and tell him I made a friend and spoke Spanish the entire time. The high of maintaining that conversation carried me through the day. Who would have thought I would one day be walking the streets of Cuba talking with a local in his native language?

Marabana, a separate event, tested my every facet. I felt caught up in the spirit that filled the streets, and made friends along my running path. Of course, I focused on running rather than photography. Even though I was not thrilled to run a 3K the day before a full marathon, I am grateful to MaraCuba for allowing me the opportunity to soak up the culture at a walking pace and photograph the course.

As the youngest runner with insightCuba, and possibly the youngest American participating in the full marathon that year (not to mention probably the only member of a father-daughter American duo to run the full Marabana), I’m overwhelmed with feelings. My experience in Cuba has filled me with pride, knowledge, and humility—and memories I’ll carry throughout my life. I can think of no individual I would rather share the experience with than my father. I am forever grateful to him for many things. One of these is sending me the text telling me I would be participating in my first marathon in Cuba.