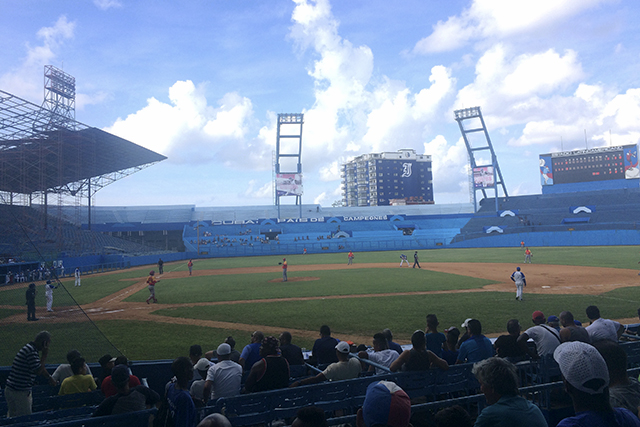 Though they are two very different countries in many ways, Cuba and the United States have at least one major thing in common: the love of baseball. Many assume that soccer is the most popular sport in Cuba, given futbol’s prominence in the rest of Latin America. But, like in the United States, baseball is Cuba’s national pastime.

Baseball has been played in Cuba since shortly after its inception in the United States in the mid-1800s, a product of geographical proximity. In the late 19th century, many in Cuba embraced baseball as a political act against Spanish rule, adopting the forbidden American sport rather than taking up Spanish bullfighting.

Despite the souring of the relationship between the United States and Cuba after Fidel Castro came to power in the 1959 Cuban revolution, baseball has remained a patriotic national phenomenon on the island. Castro, a huge baseball fan, outlawed professional sports in Cuba in the early 1960s and instead created the National Institute of Sports to foster nationwide amateur leagues for athletes to, as Castro put it, “play for the love of people, not money.”

The Cuban iteration of baseball today is very similar to the U.S. game. Cubans have even made U.S. baseball jargon their own, using English words with a heavy Cuban accent. Homerun is something like “hon-ron”, shortstop is “shor”, and hit is pronounced “heet”.

While the rules of the game and jargon are similar, Cuban and American baseball games make for two very different experiences. Cuban stadiums are almost completely void of the commercial element so prevalent at U.S. games. At Havana’s Latinoamericano Stadium, home of the Industriales team, no sportswear or insurance company ads line the field, only patriotic political slogans like “Sport is the conquest of the revolution.”

Because baseball in Cuba is not a commercial enterprise, players earn state salaries that are only slightly higher than the $24 average Cuban salary. Tickets to the game cost a whopping five cents, and there are no beer gardens or hot dog stands; instead, a few barkers hawk penny candy and shots of sweet, thick Cuban espresso in thin plastic cups. The seats are made of aging, splintered wood coated in peeling paint. You can forget about box seats.

But the lack of bows and ribbons in Cuba means that baseball games are that much more accessible to the everyday Cuban, and Cubans can get up close and personal with their favorite players. While there’s no group singing of “Take Me Out to the Ball Game” or booming voice announcing players on the loudspeaker, Cubans have fun traditions of their own and can get quite rowdy with their chants and noisemakers.

Away from the stadiums, baseball fans gather in Cuba at several designated outdoor baseball forums, a tradition that reportedly began in the 1970s. Dozens of fans assemble for hours each day to partake in impassioned discussions on all things baseball. Travelers visiting Cuba’s capital can catch a glimpse of the action at the so-called esquina caliente (“hot corner”) in Old Havana’s Central Park.

Many Cuban players have left the island to join U.S. teams, some defecting during trips abroad and others making dangerous clandestine journeys to the United States from Cuba in elaborate schemes, like the one that famously brought L.A. Dodger Yasiel Puig to the United States. Other renowned Cuban athletes now playing in the United States include New York Yankee Aroldis Chapman and New York Met Yoenis Cespedes.

This remains one of many points of contention between the United States and Cuba, and is one of the many topics up for discussion as both countries work to normalize relations. During Obama’s visit to Cuba earlier this year, marking the first visit from a sitting U.S. president in over 70 years, he accompanied Cuban president Raul Castro to a baseball game at Havana’s stadium.

As a part of the larger changes happening in Cuba in recent years, the government has made some reforms to its sports industry, including raising salaries, changing the laws to allow athletes to play in some foreign leagues, and letting former defectors return to the island to visit. Cuba’s government also plans to invest in its stadiums and add some food and entertainment options.

Catching a baseball game in Cuba and joining the debate with locals at the esquina caliente are just two of the many great ways you can witness history in the making on your tour of Cuba before it changes forever. Call InsightCuba at 1-800-450-2822 to book your unforgettable trip to Cuba today!