Home » About Us » Blog » My Cuba Diaries: Dinner at La Guarida
share 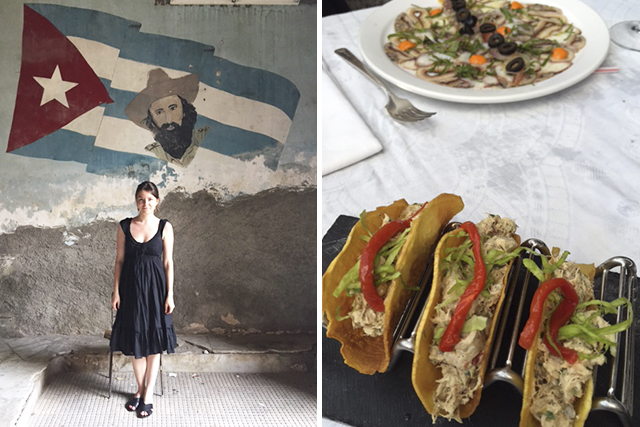 If I knew nothing else about going back to Cuba, one thing was for sure. I would dine at La Guarida, Havana’s most coveted paladar. I requested a reservation not weeks, but several months in advance. An exaggeration for sure, but my preventive excitement was off the charts. Ever since watching Fresa y Chocolate (1993), the sole Oscar-nominated Cuban movie shot on the location of today’s La Guarida (that’s hideout in Spanish), I’ve made a mental note to one day visit. And one rain-soaked June summer evening, two years after my last time in Cuba’s capital, I did.

Housed in a dilapidated 20th-century mansion in Havana Centro, a dwindling neighborhood lurking with shells of former architectural riches, this Havana emblem proved to be a highlight in every sense of the word. 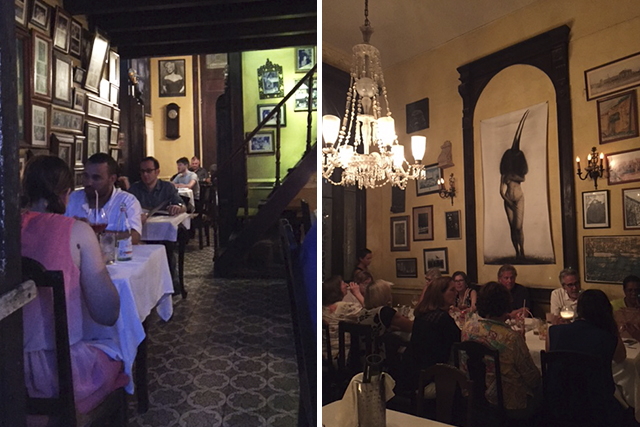 The film didn’t win the Oscar, but the entrance to La Guarida can surely snag honors for most atmospheric foyer – several floors of prewar splendor until you reach the actual restaurant. Inconspicuously marked like a well-kept insider secret, the restrained access to the venue reveals old-world beauty in ruins, so resplendent you risk missing your reservation. Marble stairs, laced balustrades, Ionic columns, and the smears of a Cuban flag gracing revolutionary hero Cienfuegos – all gracing the pages of Vanity Fair with Rihanna by Annie Leibovitz – these are just some of the film noir-ish elements present here. The ballroom like mezzanine, perfect for an otherwise world-class ballet performance, seems to be used for drying white linens. It can’t get more romantic than this, unless you head towards the balustrade overlooking the Havana vista. 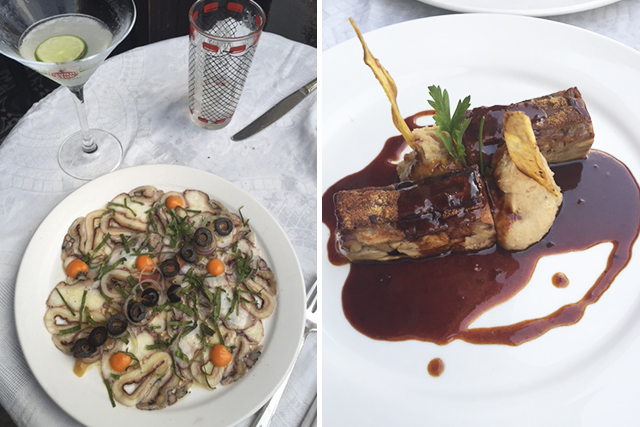 Upstairs, on the third floor, frozen daiquiris await, next to crowded walls of a celebrity who’s who once dining inside. A maze of rooms is filled with people, who made the trip on the premise of sampling La Nueva Cocina Cubana. If you come early enough (7PM), ask for the balcony table. You’re in for a rare breeze while watching American beauties on wheels drive by. The menu offers plenty of choice and, not a given in Cuba, service also pleases, with neat looking girls graciously attending your every wish. With appetizers like marlin tacos and shaved octopus, La Guarida lives up to its culinary fame, and then some. The suckling pig entrée is tender and delicious, while the tuna is perfectly cooked and spiced. The conspicuous rice and beans known in Cuba as Morros y Cristianos never fails to appear – even here – but you’re in luck, it’s tastier than ever. While prices certainly compete with U.S. fares (yes, there are plenty of Americans dining here), it is worth every penny. 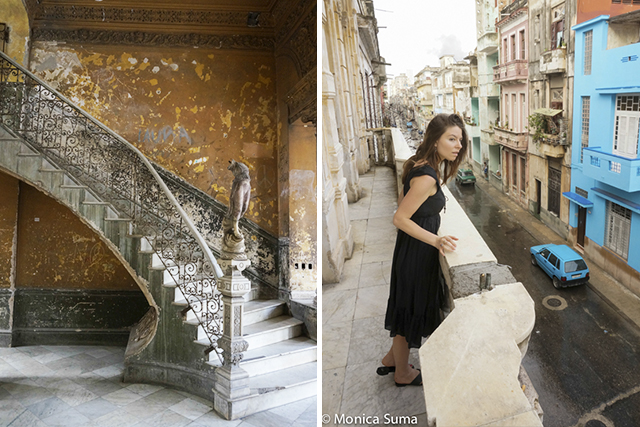 To finish off your evening, visit the more modern rooftop bar up the spiral staircase down the hallway, for cool music, people watching and stunning Havana views.

Tip: Factor in some 10 CUC by taxi from Havana Vieja.