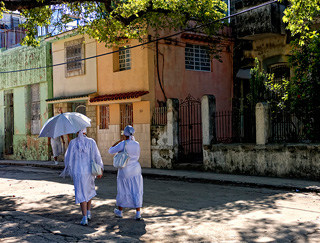 InsightCuba participants may have the opportunity to visit areas like the spiritual city of Guanabacoa located just outside of Havana, or the sizzling cultural city of Santiago de Cuba. While there, you are likely to experience an aspect of Cuban culture that is frequently seen but rarely understood by travelers. During one of our people-to-people programs,  you may even get to meet a Santería practioner face-to-face. I hope this short introduction to the Santería faith will give you something to talk about.

Hundreds of years ago, the Yoruba people of West Africa were torn from their homeland and shipped to Cuba as slavery spread throughout the New World. In order to convert the Yoruba to Catholicism, Spanish conquistadors forbade them from all worship associated with their traditional animistic beliefs. But even then, the people of Cuba demonstrated a remarkable ability to persist and assimilate.

African gods and Catholic saints would become one. Forced to live in a hostile and foreign environment, the Yoruba clung to their faith by draping statues and other manifestations of their gods with the attire of Catholic saints. Soon, saints and gods merged to become entirely new guardian spirits known as orishas, and a belief system that has become entrenched in the Cuban identity began to emerge. 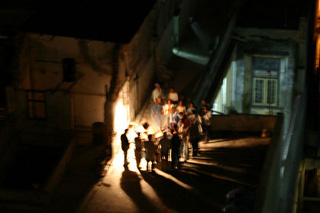 Over 50 years ago, ancestors of the Yoruba people stood enraptured as two doves flew over their heads while they listened to Fidel Castro’s speech in celebration of the victorious Cuban Revolution. As if by miracle, one of the doves proceeded to settle gently upon Fidel’s shoulder. For many in the audience, it was a clear sign that divinity had chosen their new leader. After all, doves are a symbol of Obatalá, a popular orisha who communicates with the people of earth on God’s behalf, and whom many followers of this faith believe has protected Fidel ever since.

When you travel to Cuba today, you can recognize Santería practitioners by the many initiates in white robes seen throughout the country, or by fascinating altars that contain offerings to a number of eclectic orishas. Both men and women can become Santería priests/priestesses who communicate directly with orishas. But first, they must undergo an elaborate initiation of secretive and intense ceremonies. These frequently involve animal sacrifices, followed by an entire year of dressing in white and adhering to strict rules of behavior such as initiates being unable to touch or be touched by any humans save intimate family members.

You won't find official Santería temples or churches like in most faiths, which means that you will find rituals or prayer undertaken in both public spaces and in private homes. Rites continue to be derived from animism complemented by altered Catholic saints, but the prevalence of animal sacrifice, trances and sacred drumming has led many non-believers today to apply terms like voodoo, witchcraft and cult to this faith. Then again, history has proven that Santería can withstand a little more than name calling.

I’m not sure how many of our insightCuba participants will ever practice Santería, but I hope this brief highlight of Cuban culture will help you better understand a belief system which is most likely different from your own. To learn more about Santería, travel with us to Cuba! Or for now, visit this link to watch a short video by National Geographic.